Between Two Worlds By Tyler Henry

***This is an audio book review and discussion***

Hi friends!! Hope all of you are well! I have been doing so much lately between school and life! I have been in the worst slump. Its really sad because all I used to do was read and now... I have only read 2 books this year!!! So I decided to rent or buy and listen to audio books and they have been my saving grace!!! I wanted to talk about the one I finished yesterday!
~First off this is a an autobiography of the 20 year old medium based out of Hollywood, Tyler Henry. I watch his show Hollywood Medium, and while I am a skeptic I am very much in love with the aura and presence of this young man. His boyish charm is infectious and the emotion in his eyes during a reading seems genuine. When I heard he was writing a book I knew I would have to read it. When I found out he was narrating it for the audio book I had to listen!

Tyler Henry grew up in a conservative Christian household in California. At age 10 he began his journey of mediumship as he knew a family member who was will with cancer was going to die one night. When he told his mother what he believed was about to happen, before they left she received a call that the family member had passed... As time continues through his story, Tyler talks of learning to use his abilities, being bullied, a near death experience, his most impactful readings and the final chapter is a Q&A of some frequently asked questions.

In listening to this I was hooked just by the way Tyler spoke of his gifts. Even in times of his life when having his abilities was more of a burden than a gift, he never wavers in believing that he was chosen by some divine force to be a conduit of information, a messenger. His personality is very sweet and warm and the tone of his story is one of great appreciation. He is wise beyond his years and it shows through his story.

I gave this book a 4/5. The only thing I was missing was more. The story was only 8 chapters long. While I know he is only 20 I would have loved to hear more about his personal readings with peers when he first learned about his abilities! 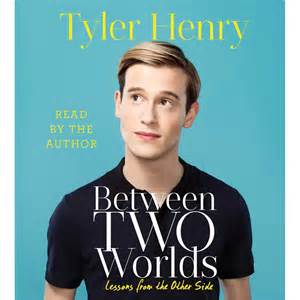 Posted by elsewherebookreviews at 6:46 PM