Hi readers! I wanted to do a post on a series that I have been reading for a few years.. But first, let me explain why I chose to talk about this series. My sister from another mister, Jamie and I were driving down to Roseville California to go clothes shopping for summer. On the ride down she kept mentioning this author Kresley Cole and how amazing her books were. Jamie has always been a reader and I was still quite picky about what I read. During the conversation she described details about the characters that left me feeling excited. I knew I had to read these books. Little did I know that they would become a beloved favorite of mine! 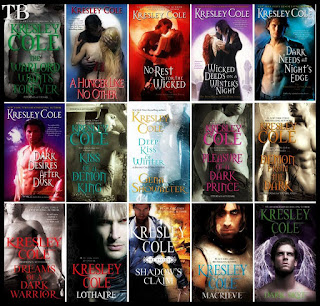 I know the covers look like something you would see a middle aged single woman read but OH. MY GOSH! This series is spectacular! It follows quite a large group of characters whose lives intertwine with one another. They are all different creatures in what is called "The Lore" and each book follows a particular couple. there are Witches, Vampires, Demons, Berserkers, Valkyrie and so much more. I am currently reading book 12 Lothaire. It is about a Vampire who is centuries old and his bride Saroya is possessing a young and naive southern girl named Ellie. I am about halfway finished and I cannot put it down. Jamie and Ashley can read each of these books in a day, they cannot put them down and I wish I read as fast as them because its a wonderful series, The newest book is not pictures but is called Sweet Ruin and it was released last year and just came out in paperback on June 21st!!! My copy is in the mail shipping via Amazon! I know that my description of these will not do justice to how Jamie and Ashley would describe them however, as you can see I am excited enough about them to share and I hope that you will give them a try!

Posted by elsewherebookreviews at 2:07 PM

Email ThisBlogThis!Share to TwitterShare to FacebookShare to Pinterest
Labels: Kelsey, Kresley Cole, The immortals after dark