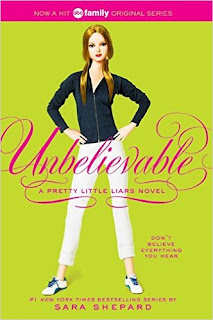 Hey everyone I just finished Unbelievable by Sara Shepard and wow! These books are such fun reads! in this book...

Spencer, the overachiever and straight A student becomes fatigued by the threats from A and maintaining her "perfect" life. She steals something that could cost her everything in the hopes of having it all.
Aria, Dating her ex BFF Hanna's ex boyfriend, but also having a scandalous affair on the side that is so juicy, if anyone were to find out it could cost Ezra his job! Kicked out of her house by her mother, from a note left by A, Aria is left to live with her dad and his ex student, now fiancee' Meridith. Can she survive?
Emily, after being sent to live with her relatives in East Jesus nowhere because her parents cant deal with the fact that their perfect daughter is gay, she meets a girl who gets her into trouble and sent home, only to get into a fight with her girlfriend Maya.
Sweet, Sweet Hanna, after getting hit by a car leaves her bruised, and stitched up she begins to lose herself in a shy boy named Lucas and her friendship with Mona, is finally on the mend...or so we think.
Mona and Hanna were attached at the hip when the liars began to drift apart but Mona has been harboring secrets that almost get Hanna killed and could destroy the group forever.
These books are so fun! I absolutely love reading them. Not only are they quick but each chapter is about a single liar and how they all come together in the end is amazing. Even though I have been watching the show for years and know what is happening it is so fun to have my own version of the show with every page I read. I gave this book a 4, the only problem I had with it was that about halfway through I became a tad bored but also I was super busy and taking a break made me lose my momentum.

Posted by elsewherebookreviews at 5:41 PM