Hey Readers! Well it has been an interesting day to say the least... I am house sitting and one of the animals is sick so I may be making a trip down to the Emergency Vet clinic something in the next hour!! Besides that I finally finished Lothaire by Kresley Cole.

Lothaire is a story about a centuries old Vampire who is trying to "marry" himself to his mate Saroya. Saroya the soul reaper is possessing a young, southern girl named Ellie who eventually makes Lothair fall in love with her and cast out his original mate Saroya.

This book started off really strong for me. I was hooked when i began to read it and I loved the relationship of the human and vampire. After awhile this book became so boring and redundant. It was one of those stories where you are gunning for the couple to fall in love and be together but once it happened it was really awkward and not as fulfilling as I had hoped it would be.

This book only got 3 out of 5 for me and I apologize for how short this review it, but I am on high alert until I find out if I am leaving to take this animal to the ER.

Check back for more book reviews!! 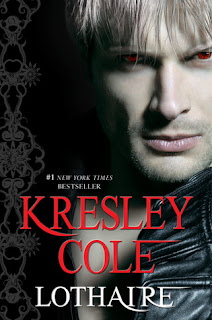 Posted by elsewherebookreviews at 4:40 PM