The Series of All Series

Hey Everyone! Its been awhile since I have done a big post on here, besides New Book Tuesday. So I was playing Lego Harry Potter on my PS3 last night and was up late trying to beat a new level and it sparked a new blog post!!! I get all my best ideas at the most random times :) So... that being said I want to talk about Harry Potter! Harry Potter and the Sorcerers Stone came out when I was in the 4th grade and my teacher read it to us, Being the child I was I didn't have time for reading. I didn't care who Harry was and why he was a wizard. (yes this is completely true) As more of the books were being published and seeing how all my peers were enjoying it, I longed to read the series. When I finally decided to rent it from the library I could not get past Chapter 1 The Boy Who Lived and I quickly gave up. Once the movies started coming out and I watched the first movie I wanted to read the books even more, but again I became bored within the first chapter. It wasn't until my sophomore year that my best friend Jamie was talking about all the books and I saw how much passion she had when she talked about them. So she made me a deal I couldn't refuse. She said "Read the first book and if you don't like it I'll give you $5 bucks, but if you do end up liking it, the deal is off." Knowing that I would win i shook on it. Little did I know that this was the exact moment in time that I was meant to read it and I could not put it down and about a week later with my tail between my legs i asked her "Can I borrow book 2"?
Now that you know why I love the books I have some pictures to share with you! 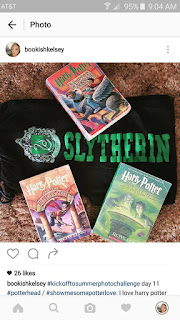 In the Photo Challenge that my friend and I are hosting via Instagram the other day happened to be a Harry Potter themed day so this is what my picture looked like.A few years ago I took the quiz via Pottermore.com that places you in the right house and to my surprise and excitement I was a SLYTHERIN! So i had to show some house spirit as well as my top 3 faves in the series!! 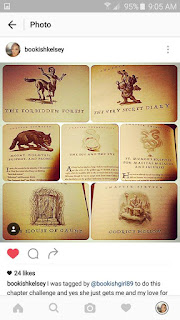 Awhile back I was Tagged to do a favorite chapter themed picture and this is what I ended up making it look like. Here is also why I chose these chapters...
The Forbidden Forest from Harry Potter and the Sorcerers Stone. I chose this as my favorite chapter because I found it quite menacing that we get a glimpse into what is so unknown to Hogwarts students and we meet Firenze, who is a lesser know but wonderful character!
A Very Secret Diary from Harry Potter and the Chamber of Secrets. I LOVED this chapter! Although it made my favorite character, Hagrid, seem guilty of a crime he did not commit, I loved that it gave you a glimpse into the past!
Moony, Wormtail,Padfoot, and Prongs from my favorite book in the series Harry Potter and the Prisoner of Azkaban This chapter for me was altering for the story as a whole. I loved learning about the 4 boys and I loved this chapter so much I have all 4 boys names tattooed on me (if you're jealous you should be :) I love that each boy was willing to go to extreme measures to help one of their own!
The Egg and the Eye from Harry Potter and the Goblet of Fire, I chose this chapter because...well... it has a mermaid!!!!
St. Mungo's Hospital for Magical Maladies and Injuries from Harry Potter and the Order of the Phoenix. This is a very sad chapter and we get a glimpse into one of the most beloved characters, Neville Longbottom's Life and relationship or lack there of with his parents. A heartbreaking chapter that fills in alot of gaps!
The House of Gaunt from Harry Potter and the Half Blood Prince. OH. MY. GOSH! This chapter had me spellbound (no pun intended) for days after I read it. There is so much that gets pieced together in the short amount of pages. We find out who Tom Riddles family is where he comes from, but not only that. We find out a secret about him as well!
Godrics Hollow from Harry Potter and the Deathly Hallows. I dislike the book very much. I only somewhat liked the chapter I chose to showcase only because we see where Harry and his Parents were from and where the deaths of Lily and James Potter happened. I feel like this book was so half-assed. There was no real passion in it for me like the other 6 before it. Even the battle of Hogwarts was not as grand as you would think.

I am a Harry Potter nut and if you have not tried reading the books because you were like me and got bored or you just haven't thought about trying them, I hope this post gives you the courage to do so!
Posted by elsewherebookreviews at 9:42 AM