Hey friends! I just wrapped up the first book in my Goodreads book group. I had previously posted a picture promoting the group so this may look like a duplicate but its not, here is my review.

Dreamology is a story about a girl named Alice who lives with her father and bulldog named Jerry. Alice lives to have dreams about a boy named Max. They see each other every night during a regular REM cycle and have fantastic adventures. Little does Alice know that Max is very much real and when she and her father move from New York to Boston her life is about to be turned upside down.
Alice's mother left to do research in places like Madagascar when Alice was very young. Because of the abandonment she began to have nightmares. At a loss of what to do her father takes her to a place that researches dreams and she is placed in the hands of a man named Doctor Petermann, who turns her nightmares into vivid beautiful dreams.
Max has it all, a gorgeous house, a full work load at school and a beautiful girlfriend named Celeste. On a regular day he sees a girl he has known for years because Max is dreaming of Alice too. Alice decides to approach Max and he plays it off as if he knows nothing, hiding his fear that he is going crazy. What we find out is that Max was also placed in the care of Doctor Petermann after tragedy struck his family and now he and Alice are experiencing "Dream Bleeding" where reality and dreams are colliding and if they don't do something about it fast they could lose not only each other but also their sanity...
I am disappointed in this book. Upon writing a mini synopsis for this post i found myself getting excited again about this book but sadly my writing is what made me excited not the story. There were some great moments don't get me wrong. Max is adorable and sweet. Alice is a very different character and overall I liked all of the characters but I found myself getting bored with the plot. It was so back and fourth it was like reading a soap opera. I was beyond excited to finish to see if they ending would redeem the book and it did a little, however i have to give this book only 2.5 stars... The plot sounds amazing, the characters were good, the final result left me unsatisfied. 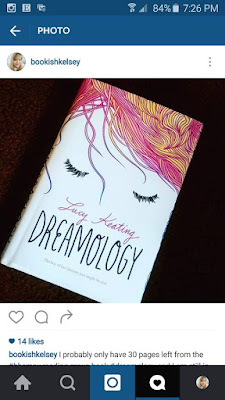 Posted by elsewherebookreviews at 7:43 PM