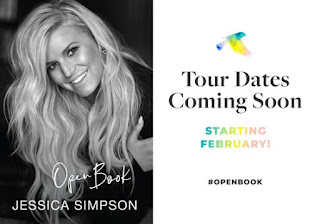 Hey friends! Kelsey Here. Wow it has been quite a long time since Ashley or I have posted on here. Life has been busy for both of us. I wont lie to you either, I have been listening to so many audiobooks that I could write up at least 50 reviews but mom life has kept me insanely busy. Add on the loss of some amazing individuals in my life, a move and school i have not had the want to blog. My mind has been in ten thousand different places. However i have been inspired to post for you so my goal is to bring this blog back to life. It was such a fun endeavor for us and i know Ashley wants to post more too. I hope that we can and I will do my absolute best to stay inspired and ppost about what i read. That being said here is my first review of 2020.

Open Book by Jessica Simpson
Many of you have no idea, but from the age of 14 until I was 21 Jessica Simpson was my idol.I own every season of her and her now ex-husband Nick Lachey's reality show Newlyweds: Nick and Jessica. I had the whole lip collection of her Dessert line and I even had a pair of jeans from her clothing line! To this day at 31 I still find her so amazing and when i heard she was releasing a book I was over the moon. I decided to listen to the audiobook because she narrates it and for me it added to the entire experience.

Her story starts off with a heavy dose of her southern charm. She talks about living life with her family and frequently moving due to her father job as a minister. She comes from very humble beginnings with a family who did not have alot of money and were God fearing Christians. As the story progresses Jessica faces abuse from a family friend, trying out for and not making the infamous Mickey Mouse Club, losing her idol in her cousin Sarah's tragic death, finding fame and love on tour with 98 degrees, her reality show and "blonde moments" with then husband Nick Lachey, her failing first marriage, finding the love of her life in her now husband Eric Johnson and having her three babies. But the main theme is really all about her struggles with Alcohol and how all of the events that happened in her life led up to the moment she decided to get sober.

The first part of her book is quite sad. Between the abuse, and losing her cousin we see a side of Jessica that America did not see on her reality show and that her song lyrics never conveyed. She even begins to cry in her narration. As her story progresses I began to remember why i adored her so much as a teenager. She is so relatable and humble and she is not afraid to make fun of herself which is charming. But what I found the most amazing about this story is how her faith never wavered. Through the years of abuse, and heartbreak and loss she still remained steadfast in her love and blind faith in God. As someone who never had that connection with faith I was blown away listening to her thoughts on God and her prayers.

When Jessica meets Nick and begins to fall in love, I felt like I was 14 all over again. I am a HUGE self professed 98 degrees fan with Nick being my favorite so when I saw that he and Jessica were going to have a reality show on MTV I was elated! At the time i thought they were perfect and I had no idea why in 2006 they wanted a divorce. Now as a married woman, I cannot fathom how they stayed together as long as they did. They were under constant scrutiny and always followed by cameras. I will admit that when she was describing feeling ready to leave Nick and how she had changed my teenage heart broke all over again. As silly as that sounds.

Cut to when she meets her now husband Eric and becomes a mom and my heart began to burst! Again as a wife and mama hearing about how her pregnancies were and what she craved was so much fun. She is the first person to tell you how hard trying to get pregnant, being pregnant and giving birth is. She is so candid and real, its refreshing!

Open Book was such a great way to kick off my 2020. Her story made me laugh out loud and ugly cry. She makes you feel like she is telling you her story in casual conversation. She found a way to speak her truth about the good, the bad and the ugly and she did it eloquently. I think this book is good for many different types of readers. If you love her music and her its a way to get to know her. If you are struggling with the same issues of Abuse, grief and or alcoholism, she lets you know, You're not alone. If you are just a fan of a celebrity memoir its an easy read. I rated it 5 stars but i am a bit biased. I highly recommend it!

Well friends there you go! I just finished my first review of 2020 and I hope to post on my current read soon!
Posted by elsewherebookreviews at 8:17 PM