Hey Everyone! Can you believe that we are halfway through January already! Ashley and I wanted to do a post about the best books we read last year. I read so many great books so I had to narrow it down to only three. I will be posting a Synopsis directly from the book and then a mini review!  The Photo I am using is one I took showcasing the books! Hope you enjoy this post and Ashley will be posting hers soon~

The Wicked Deep. By Shea Ernshaw
"Welcome to the cursed town of Sparrow. Two centuries ago, three sisters were sentenced to death for witchery. Stones were tied to their ankles and they were drowned in the deep waters surrounding the town.
Now for a brief time each summer, the sisters return, stealing the bodies of three troubled girls so that they may seek revenge, luring boys into Sparrow's harbor and pulling them under.
Like many locals, Seventeen-year-old Penny Talbot has accepted the fate of the town. But this year, on the eve of the sisters' return, a boy named Carter arrives, unaware of the danger he has just stumbled into.
Mistrust and lies spread quickly through the salty rain-soaked streets. The townspeople will turn against one another. Penny and Bo will suspect the other of hiding secret. And death will come swiftly to those who cannot resist the call of the sisters.
But only Penny sees what the others cannot. And she will be forced to choose: save Bo or save herself."
This was by far my favorite book of 2018! It was such a great combination of Hocus Pocus meets Practical Magic. This is the debut novel for Ernshaw and she nailed it! First off, her characters were outstanding, especially the Swan Sisters. They were dynamic and very relatable. The setting of Sparrow, Oregon was near and dear to my heart as I LOVE Oregon and also live on the west coast. The final twist was one that I didn't see coming which only made me love this book more. I rated this book 5 stars on Goodreads and recommend to anyone who loves a spooky and witchy read.

Odd and True. By Cat Winters
"Meet Odette and Trudchen  Grey. Of has always claimed that their mother slayed monsters and that she and her sister are destined for the same adventures. Tru, who has struggled to walk ever since a childhood illness, suspects that her fantastic stories are merely comforting lies.
But even skeptical Tru believes  there is a dark force approaching.
In 1909, after vanishing two years earlier, Od reappears in Tru's life with a suitcase full of weapons and a promise to rescue Tru from the monsters about to attack.
Od seems haunted, searching for something she cant talk about. Tru goes along with her sister in the hopes of finding their long missing mother, but neither girl will find exactly what she is looking for.
Cat Winters did an amazing job with this story. I consider myself one of her biggest fans and this book did not disappoint! It reminded me of the hit show Supernatural except with women in 1909 and before. The backstory of the sisters and their mother is heartbreaking and so real. Winters made me weep while reading their story. The strong female characters is also something to celebrate. Both Od and Tru are a force to be reckoned with, armed with wit and strength. I gave this book a 5 star rating!

Hocus Pocus and the All New Sequel. By A.W Jantha
Shortly after moving from California to Salem, Massachusetts, Max Dennison finds himself in hot water when he accidentally releases a coven of witches, The Sanderson Sisters, from the afterlife. Max, with his sister and his new friends (human or otherwise) must find a way to stop the witches from carrying out their evil plan and remaining on earth to torment Salem for eternity.
Twenty-five years later, Max and Allison's seventeen-year-old daughter, Poppy, finds herself face to face with the Sanderson Sisters in all their sinister glory. When Halloween celebrations don't quite go as planned, its a race against time as poppy and her friends fight to save her family and all of Salem from the witches' latest vile scheme.
Okay, so Hocus Pocus is my all time favorite Disney movie, so when I found out somebody was retelling the original story and adding a second part I was ecstatic to say the least. I absolutely loved this book. The retelling was so nostalgic and while I frequently watch the movie I still couldn't help but feel like a kid again. The sequel was great as well! I really enjoyed the new characters and their interactions with the original cast. The only thing I would change is some of the corny dialogue in part two. There were some one liners that I couldn't help but cringe at. Overall it was so fun and the ending only made me love it more. I also gave this one a 5 star rating! 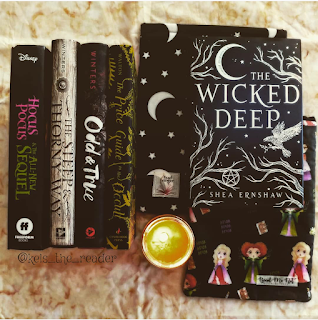 Posted by elsewherebookreviews at 3:08 PM