How to Hang a Witch by Adriana Mather

"The more things change in Salem, the more they stay the same."

When Samantha Mather's father falls into a coma, she and her stepmother Vivian move to the infamous Salem MA in search of a fresh start. This fresh start consists of a group of peers who are called "The Descendents" relatives of the famous families that were persecuted during the Salem Witch Trial. A ghost named Elijah, dead for over 300 years still mourning the loss of his sister Abigale and an Ancient curse that needs to be broken.

Strange things begin to happen to Samantha in her new home, clothes begin to fly out of her wardrobe, a bunch of journals written by her grandmother make an appearance. When The Descendents are all together sickness or pain makes itself present and because Samantha is the new girl it is all blamed on her.

Then Samantha begins to have visions of the deaths of her peers that are beginning to happen, O guy named Jaxon and his mother Mrs. Merriweather begin to reach out to Samantha as she begins to put pieces of the curse's puzzle together. Her relationship with her Step-mother begins to strain under the pressure she feels and all the while she begins to fall in love with the Ghost Boy Elijah and he with her.

Its a race against time, a centuries old curse and witch who are much closer to Samantha than she ever knew. Can she break the curse?...

Hey friends, I hoped you liked the breakdown of this book, now lets get to the long awaited review.

OH.MY.GOSH!!! This book had me sucked in from page 1!!! I am a witch fanatic so when my husband saw it at Barnes and Nobel I had to buy it. For me the plot is what sold me but it was the characters that made me fall in love. Samantha is a strong and brilliant young woman, who gives all of her strength and heart to those she loves. But it was Elijah who stole my heart. At first he was a ghost filled with hatred and angst against the "witch" who killed his sister. He eventually becomes, softer and sweeter through the story and ultimately falls in love with Samantha. I don't know what it is but I have fallen in love with another fictional ghost boy (the first was Caspian Crane from The Hollow) .

If you haven't read this or heard of it, go buy it now. It is one of the most historically accurate books from The Salem Witch Trials while adding the fiction to the plot and the love story of a girl and a ghost. 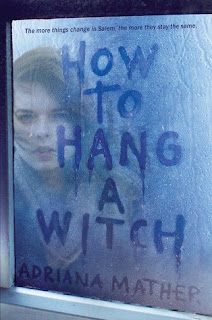 Posted by elsewherebookreviews at 10:43 AM

Email ThisBlogThis!Share to TwitterShare to FacebookShare to Pinterest
Labels: how to hang a witch, Kelsey